Therese Bonnici  from The Malta Independent wrote a beautiful article about my ‘Doors of Malta’ photography project. 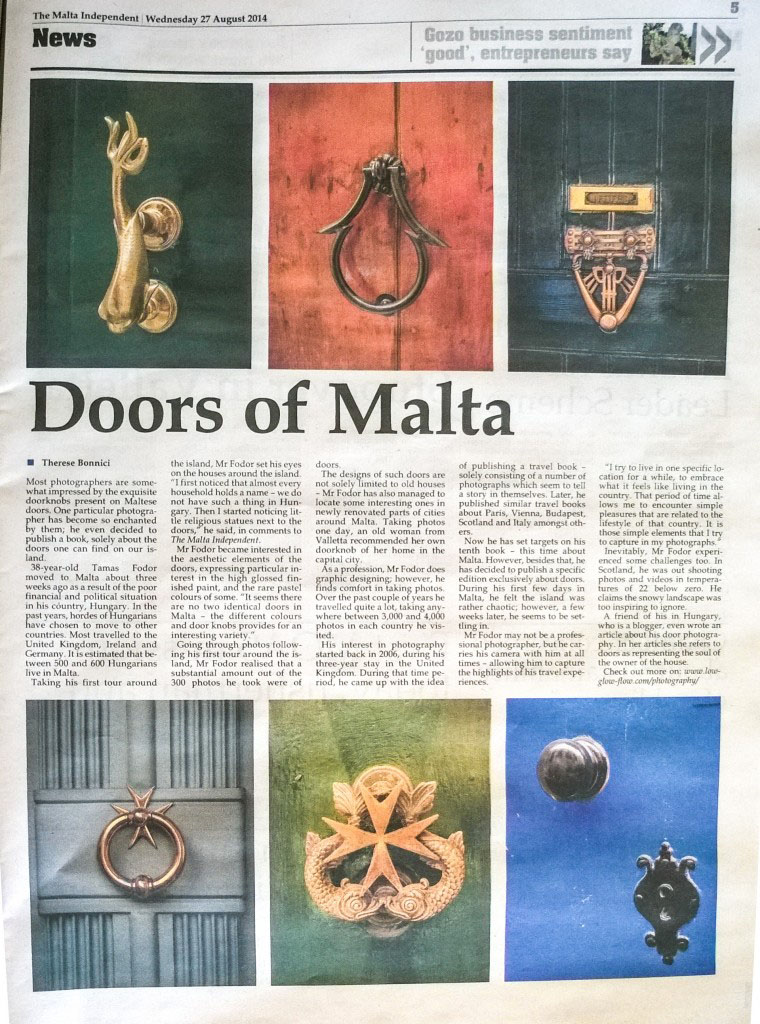 Most photographers are somewhat impressed by the exquisite doorknobs present on Maltese doors. One particular photographer has become so enchanted them; he even decided to publish a book, solely about the doors one can find on our island.

38-year-old Tamas Fodor moved to Malta about three weeks ago as a result of the poor financial and political situation in his country, Hungary. In the past years, hordes of Hungarians have chosen to move to other countries. Most travelled to the United Kingdom, Ireland and Germany. It is estimated that between 500 and 600 Hungarians live in Malta.

Taking his first tour around the island, Mr Fodor set his eyes on the houses around the island “I first noticed that almost every household holds a name — we do not have such a thing in Hungary. Then I started noticing little religious statues next to the doors,” he said, in comments to The Malta Independent.

Mr Fodor became interested in the aesthetic elements of the doors, expressing particular interest in the high glossed finished paint, and the rare pastel colours of some. “It seems there are no two identical doors in Malta the different colours and door knobs provides for an interesting variety.”

Going through photos following his first tour around the island, Mr Fodor realised that a substantial amount out of the 300 photos he took were of doors. The designs of such doors are not solely limited to old houses – Mr Fodor has also managed to locate some interesting ones in newly renovated parts of cities around Malta. Taking photos one day, an old woman from Valletta recommended her own doorknob of her home in the capital city.

As a profession, Mr Fodor does a graphic designing; however, he finds comfort in taking photos. Over the past couple of years he travelled quite a lot, taking anywhere between 3,000 and 4,000 photos in each country he visited.

His interest in photography started back in 2006, during his three-year stay in the United Kingdom. During that time period, he came up with the idea of publishing a travel book solely consisting of a number of photographs which seem to tell a story in themselves. Later, he published similar travel books about Paris, Vienna, Budapest, Scotland and Italy amongst others.

Now he has set targets on his tenth book — this time about Malta. However, besides that, he has decided to publish a specific edition exclusively about doors. During his first few days in Malta, he felt the island was rather chaotic; however, a few weeks later, he seems to be setting in.

Mr Fodor may not be a professional photographer, but he carries his camera with him at all times — allowing him to capture the highlights of his travel experiences.

“I try to live in one specific location for a while, to embrace what it feels like living in the country. That period of time allows me to encounter simple pleasures that are related to the lifestyle of that country. It is those simple elements that I try to capture in my photographs.”

Inevitably, Mr Fodor experienced some challenges too. In Scotland, he was out shooting photos and videos in temperatures of 22 below zero. He claims the snowy landscape was too inspiring to ignore. A friend of his in Hungary, who is a blogger, even wrote an article about his door photography. In her articles she refers to doors as representing the soul of the owner of the house.